Food that doesn’t suck, and also might fight cancer

When I was first diagnosed, I told myself that I would immediately change my diet to more healthful foods.
A month and a half, several boxes of Girl Scout cookies, emptied Ben & Jerry’s containers, numerous frozen taquitos, and bags of Cheetos later, clearly something has gone awry. The tipping point was the frozen bean burrito I ate over the weekend. Sinfully good (stretch your imagination. a little harder now) in moderation, but not exactly something I should be eating any more than once a year- especially not with cancer.

For instance, I’ve stopped shopping the perimeter of the grocery store. I used to ONLY shop the perimeter of the grocery store (where the healthy things live) except to grab my dried/canned beans, whole wheat pasta, and the occasional matzo ball mix. Now it’s easier to jaunt down to pick up Riceroni than it is to, you know, chop up veggies and make my own rice stir fry.

This bothers me, and after my nutritionist pointed out that I wasn’t getting enough whole proteins, I need to clean up my plate.

Of course it will take some time. My worst habit is going to the grocery store with no real plan for what my meals will be for the week. If I plan it out day by day, I have much healthier foods and don’t waste money. My next grocery run will include a meal plan for the week.

Tonight I went to the grocery store and while aimlessly walking through the aisles, came across the meat section. There was a pork tenderloin staring at me. Now, I grew up Jewish. Around 4th grade, I decided I would become *really* Jewish and stop eating all pork, unless it was “foreign” (G-d forbid I gave up my potstickers!). Mostly this was to get out of eating ham and bacon, which I still dislike, but I still ate scallops and cheeseburgers with gusto. Pork tenderloin is therefore foreign territory as far as cooking, though I’ve heard how versatile it is to cook with. Loaded up with pre-marinaded (hey, I’m not that adventurous!) tenderloin and a package of brussels sprouts, I headed home planning to cook a healthy meal. 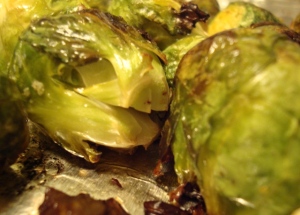 The brussels sprouts were courtesy of my friend Sarah, who has a phenomenal blog called Life Lived Healthfully (I strongly suggest checking it out!). She has long touted their virtues despite my protests with memory of the slimy globs served in middle school cafeterias. I followed her advice and roasted them with a little olive oil, salt, and pepper (and a few shakes of garlic powder and thyme for good measure).

I mean really, it sounds nuts. How can a relatively bitter vegetable that looks like miniature cabbage be candy? Oh, my friends, it is. I couldn’t stop popping them in my mouth while waiting for my pork tenderloin to finish cooking (also excellent- and I froze the rest of the massive portion to cook later on!).

Liking brussels sprouts is a really good thing. Why you might ask? I’ll tell you! Lymphoma is not a cancer that is caused by something you did or didn’t do. However, eating darkly colored fruits and vegetables are the one proven dietary habit to maintain that helps battle lymphoma. In particular, cruciferous vegetables are considered extraordinarily helpful. Brussels sprouts are cruciferous, along with cabbage, cauliflower, broccoli, rugala, bok choy, and collards. The less you can cook them, the better so the 25 minutes in an oven for brussels sprouts is perfect.

“Eat the rainbow,” my nutritionist said. I definitely need to get a bit more creative while making healthy, nutritious, veggie dense dishes that don’t break the bank.

8 comments on “Food that doesn’t suck, and also might fight cancer”