On Thursday night, my mom and I walked with a few thousand other blood cancer survivors and supporters in the Leukemia and Lymphoma Society’s Light the Night Walk. Even the constant drizzle didn’t dampen the spirits of Boston’s largest Light the Night Walk ever. 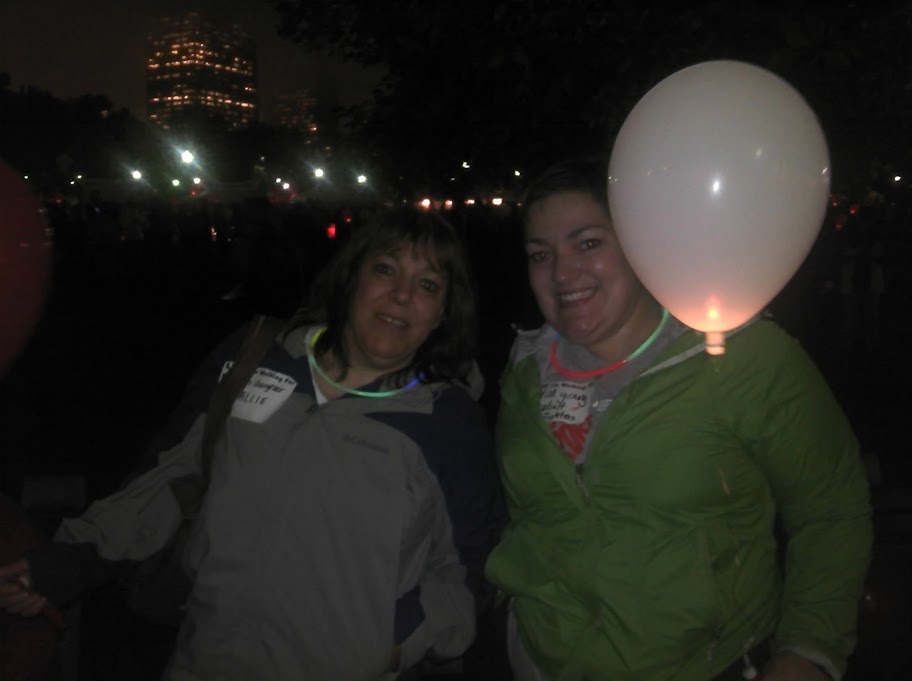 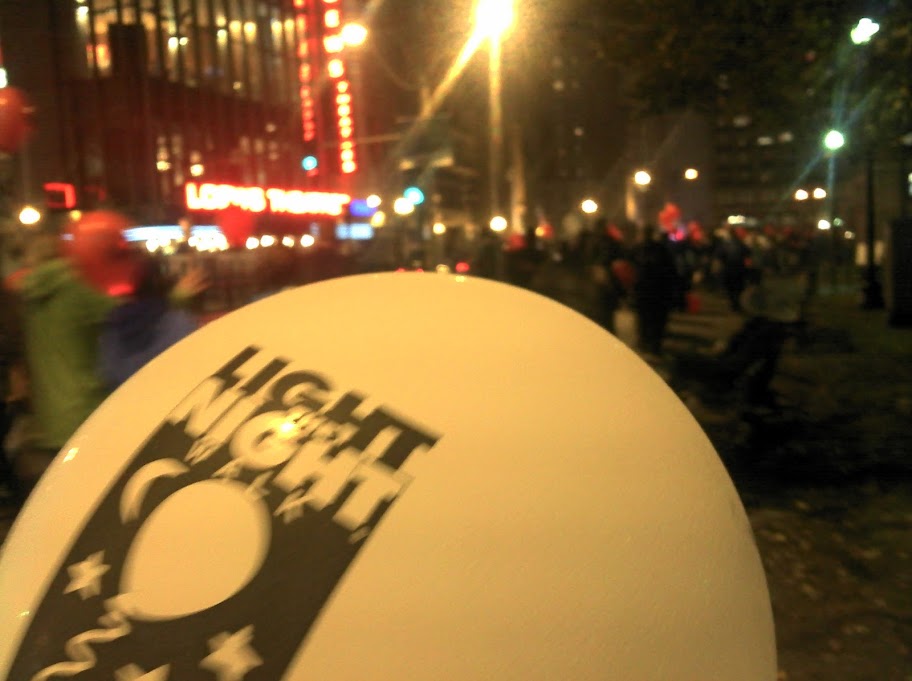 The walk is held yearly at the Boston Common and is two laps around the perimeter, equaling about 2 miles.  All survivors got a white illuminated balloon and tshirt (with the word “Survivor” across the back). Others had to raise at least $100 toward leukemia, lymphoma, and multiple myleoma in order to receive their balloons. My mom was able to raise over $300 thanks largely to her superstar coworkers and got a red balloon, which meant that she was a supporter. Sadly, there were many gold balloons which signified that a walker was walking in remembrance of someone.

There were several speaking programs that my mom and I skipped because I didn’t want to hear them. I struggle listening about people who have passed away. I don’t feel out of the woods enough to have survivor’s guilt yet, but hearing about others’ losses makes me anxious about my own prognosis.

I was happy to make it about a mile and a half. I haven’t walked very far since early on in the beginning of my treatment because of fatigue. The last time I walked a mile was probably sometime in June. I only had to sit down once. Next year I will absolutely make it the 2 miles.

How many Will's can you fit in a Cessna? One. Barely.

As far as other life updates: My mom is in town until Sunday. Hooray! We saw my grandparents yesterday and my brother and his wonderful girlfriend, Mary, today.

I did indeed fly in a plane a few weeks ago. And I didn’t cry! It was pretty cloudy so we weren’t up for very long.

Good news: I think I identified the root of my phobia of flying. I have no control in a commercial airliner. Now, I don’t have any control in a Cessna either, but I can see the cockpit and instruments, watch the pilot (though Will’s concentration face was making me panic a little), and I have my own headset so I can hear everything that’s going on. Not to mention that I feel like I can jump out if I need to. No one is saying my phobia is moored in reality. It was nice to not feel like I was one step away from being carted off to a psych ward when on a plane. Maybe this is one step to getting over the fear. Unfortunately, I didn’t get any pictures inside of the plane or when we were up in the air because I was scared of taking pictures with my phone due to the conditioning from commercial flights. Really, I tend to think that’s mostly security theatre since if any plane instrumentation is going to go haywire due to cell phone signals, it’s a Cessna, but I wasn’t taking that chance.