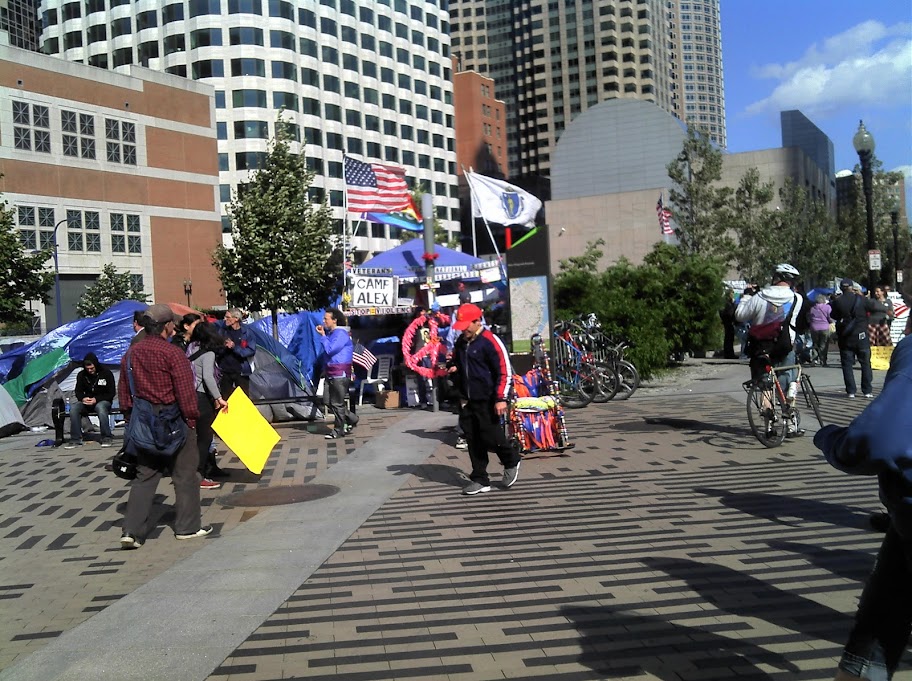 People keep asking me what I think of Occupy Wall Street and, by proxy, Occupy Boston. After all, I seem like the perfect fit in the movement: politically engaged, a history of political organizing and activism, and a story that fits right into the party line. Except, I don’t know what the party line is.

I read the websites, Twitter feeds, blogs, etc, and yet I still do not know what path for tangible change is being promoted. I understand people are angry. I am angry too. But when I am angry about an injustice, I work with groups that execute plans to get things done in an organized, media-savvy way. Occupy has none of these bases covered. If I am confused and feel disconnected from the movement, what is Suzie Suburbs thinking?

Political movements need a few things: effective leadership, direct purpose and message, cohesive PR/media strategy, a defined voice, and a clear pathway to create the change the movement is working to achieve. Some of these can be left out, but Occupy has not a single one of those bases covered.

Today, I went down by the camp at Dewey Square in Boston and also watched the march from Boston Common. It’s basically taking that angry kid on a message board who is fighting “the man”, multiplying him by 1000, and throwing him on the street. Toss a few Ron Paul fans in to delegitimize the whole thing and you’ve got what I saw this afternoon.

From where I sit, Occupy is hurting the progressive movement. I like marches as much as the next gal, but I like things happening better. When we talk more than act, we become an embodiment of what the right likes to call us: a bunch of smelly, aimless, unorganized hippies who like to hear ourselves talk. Maybe the old ways of creating change don’t work – lobbying political entities and voting in politicians whose goal is to be elected do not effectively create change in most scenarios. But I still do not know what the goal of Occupy is beyond showing the world how angry they are.

Am I getting old? Am I listening to too much Phil Ochs?

I saw a whole lot of Uncle Louie being thrown around. I have one of my own:

The greatest dangers to liberty lurk in the insidious encroachment by men of zeal, well meaning but without understanding.  ~ Louis D. Brandeis

Then there is the We Are the 99 Percent Tumblr. I want to empathize with everyone. Many, I do. Some stories bring tears to my eyes. Others I want to reach through the computer and shake. I worked my ass off through high school to get a merit scholarship to college. Yes, I was lucky to have a grandfather that would cover the difference for which I will always be grateful – but if I hadn’t, I would not have gone to Brandeis because the $30,000 of debt I would have accrued in 4 years would not have been worth it. I cannot bring myself to feel sorry for people that are my age and in $50,000, $60,000, or $100,000 in debt for undergrad alone. That was a choice. There are so many scenarios that can create debt. I am in debt myself due to cancer. But education can be found at so many institutions – community college, public schools, private schools with merit or financial aid. If you choose to go to a private university without the aforementioned aid, then please do not expect those of us who truly have fallen on hard times to empathize with your bad decision.

I am the 99 percent because I was diagnosed with cancer at 23 and had to work full time at a job  through chemo in order to keep my health insurance and a roof over my head. I had to move 1000 miles away from home to a much higher cost of living area in order to get the job. My cancer was discovered at the last stage because I went months without health insurance and even when I did have insurance during college, it cost too much to get a 2nd opinion despite knowing something more serious was wrong. My parents have been hurt by the economy and are unable to help me financially. I have worked hard for everything I achieved, made the right choices, and have seen so much of that crumble before me because I happened to be one of 70,000 young adults to be diagnosed with cancer this year. Now, I will not be able to enter the career I trained for nor will I ever be in a position to start my own business because of healthcare coverage concerns. I am the 99% because I am at work during the day and spend my nights working to fix the healthcare system, not because I scream the loudest at a protest or make the most eye catching sign.

I leave you with this final image. It by far is the most poignant of the 99 percent Tumblr.