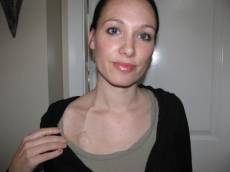 What a port looks like on someone who is not me. You can see the actual port (the round thing sticking out) and the catheter which goes up into a vein in the neck. Because I am bigger on top, mine shouldn't be quite so prominent.

Tomorrow morning at 9AM, I will be wheeled into surgery to get my mediport/portacath, which shall henceforth be called a “port”. Surgery might be too strong of a word… I believe my doctor referred to it as a “procedure”. I call anything where they hack open my chest to shove a piece of plastic and a catheter down my vein a bit more serious than a procedure, but I digress.

Can you tell that I’m “excited”? I’ve been dreading tomorrow since I was first diagnosed.

You can see that the catheter goes down the vein towards the heart.

As much as I dread the idea, a port is really a good thing for my treatment. Instead of having chemo through an IV in my arm, I will have it directly into the port. The port is a self-sealing tube that sits under the skin and allows the chemo drugs to enter my veins through a catheter. By doing this, the drugs do not need to be diluted and will not hurt as much (as with the IVs which often really sting) and it will not take as long. I will still probably be sitting in the chemo ward for 6 hours a pop, but that’s quicker than it would be with a standard IV. Several of my chemo drugs can damage flesh which makes an IV also fairly dangerous. Because my chemo treatment will be between 6 to 8 months, there is a good chance that my veins will become damaged. The risk is too great that I will run out of good veins with standard IVs. Additionally, any bloodwork that needs to be done can come directly out of the port.

I can still swim, shower, exercise, basically do whatever with the port (once it’s healed, of course). After I am in remission, the port is left in at least a year “just in case”. Many people leave theirs in longer. I don’t imagine that I will be one of those people. 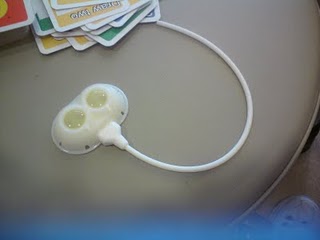 Double wide port- isn't that exactly what you want sticking out of your chest?

The bomb was dropped on Friday that my port will be a double wide. In case I need extra fluids, an iron drip (to help with my anemia), or anything goes wrong with the first side, I will always have the other side of the port

I’m not too happy about it. The nurse who was giving my “chemo teach in” offered to call up the surgery center and make sure that I was only given the single one. Her argument was that body image is just as important as actual medical need. However, if my oncologist thinks I need a double then I’m going to do what makes the most medical sense- I’d rather adjust how I see my cyborg self than risk problems because I only had one port. If my treatment is long enough that it warrants a double port than so be it.

The nurse also told me to be firm with the surgeon about the port placement. I don’t want it to be seen with my clothing and am hoping they can put it further away from the center of my chest. I’m not sure how much say I have, but if this beast is going to be in me for the next 2 years then I certainly have some say!

One of my friends is picking me up after surgery and taking me to get percocet (why won’t doctors prescribe that to you BEFORE surgery? Why do I have to wander into a pharmacy right after being hacked open?), and then hopefully off to bed. I plan to be back at work on Tuesday, fingers crossed.